Pictures of some of the cast & our crazy dancers 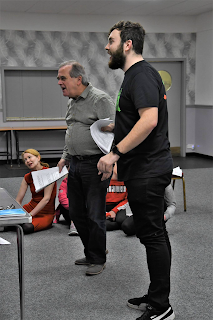 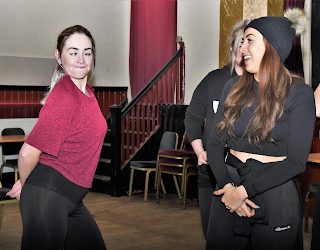 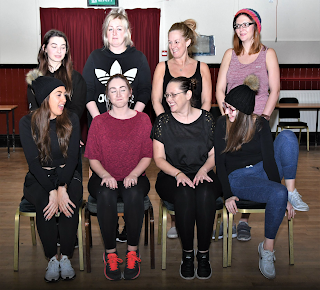 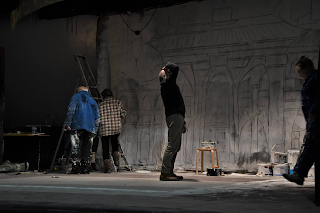 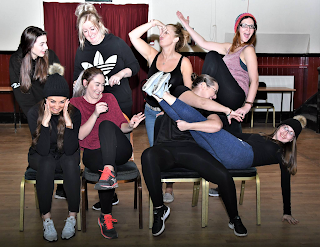 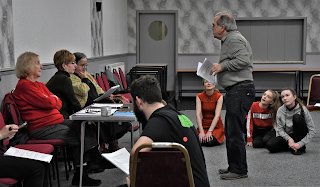 rehearsing and our hard working stage design crew preparing for our 2019 Panto ALADDING and his wonderful lamp.
Posted by St Joseph's Players at 12:36 No comments: 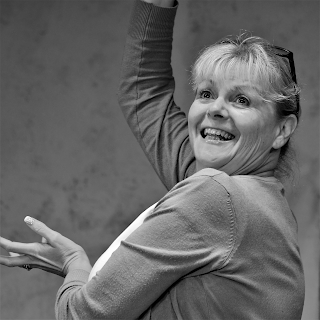 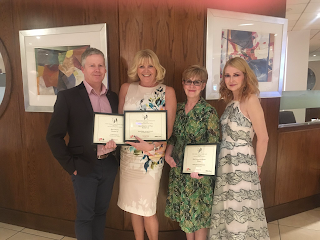 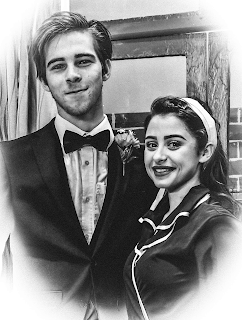 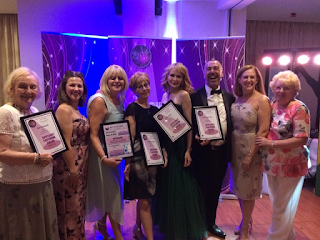 Posted by St Joseph's Players at 14:12 No comments:


Noel Cowards ‘This Happy Breed’ tells the story of the Middle Class Gibbons family and covers the period between World War I and World War II. We are given an insight into the life of the family when Frank Gibbons returns from Army duty. They have just moved house and are a family again with their three children along with Franks Sister and Mother in law and next door neighbours – The Mitchells.

Directed by St Josephs stalwart – Doreen Johnson, we witness the ups and downs of family life and the trials and tribulations that Franks wife Ethel faces as she copes with her role of trying to keep the family together as they experience family dispute and sudden loss.

Pauline Nevell in the role of Ethel turns in another accomplished performance. Pauline displays excellent stage presence with a believable interpretation. Darren Nash as Frank understood the character and portrayed him well displaying some good interaction between other characters. Karen Jones excelled as daughter Queenie (who leaves the household to follow her heart to be with an older partner) as did Clare Nash in the role of Franks Sister, Sylvia. Both characters were well read. Christy Coleman as daughter Vi and Jordon Boyle as son Reg completed the family line up and both turned in good performances. Barbara Mayers as Mother- in-Law, Kitty brought a comedic aspect to the piece with some great one-liners.

Solid supporting performances from, Michael Evans, Ryan Deakin, Zoe Unsworth, Danny McCarrick and Kitti Dixon completed the line up of twelve characters who all complimented each other well. With a constructed box set depicting the Gibbons living room the whole cast and crew worked well to create another excellent production from St Josephs Players.

Posted by St Joseph's Players at 14:25 No comments:

THIS HAPPY BREED BY NOEL COWARD

ST JOSEPH'S PLAYERS next production is NOEL COWARDS "THIS HAPPY BREED" Directed by Doreen Johnson, Comm. on Tues 16th Oct. to Sat. 20th Tickets £10 adults & 16yrs and under £5 Advance tickets will be available from Spectrum Blinds Chapel St. opposite St Joseph's Church, or pay on the door on the night,
This Happy Breed shows a different side to Noel Coward's writing than one we might be used to. Rather than dealing with the affairs of the upper classes, we instead see the movements of the lower middle-class Gibbons family, between the end of World War I and the outbreak of World War II.

This crucial twenty years of British history is made personal by the lives of Frank and Ethel, and their children, Queenie, Vi and Reg, along with friends Bob, Billie, Sam, Phyllis and Edie. The disintegration of European relations is a backdrop to suburban ennui, socialist rhetoric, and patriotic strike breaking, as alliances fail and revive within a small dining room near Clapham Common.
Posted by St Joseph's Players at 18:52 No comments:

Oscar Wilde’s play is about Victorian morals, a comedy of manners. The principle character, Viscount Goring, is a fictionalised caricature of Wilde himself. In this production, only his top hat and cape were missing. The story has a plot full of contrivances including a letter from the past, and a bracelet with a secret clasp. The heart of the play is in its relationships.
A splendid box set with a central staircase depicted the wealth of the Sir Robert Chiltern. The costumes, while not always quite appropriate, displayed the fashion of the day. The lighting and sound added to the overall presentation of this drama.
The director captured the essence of Wilde’s stylish wit; the pace of the piece was never laboured. Attention to detail was good, but maybe there were just some small niggling aspects missing. However, the all-important relationships were believable.
The play opens at the Grosvenor Square home of the Chiltern’s. There we meet an array of characters. Lady Markby – Chris Lovelady, Countess of Basildon – Kay Unsworth, Mrs Marchmont – Angela Grime, Mr Montford – Karl Gerrard, Duchess of Marlborough – Pauline Dowsett,Lady Jane Barford – Debbie Wood and Viscomte De Nanjac – Muhammad Al-Yasseri . Their contributions were important and set the accent of the social high ground of 1895 London.
Upstairs staff was needed to pamper the guests, Luke Ellam took his duties as Mason seriously looking after the élite of London’s society.
Faced with public ruin, Robert Chiltern is a man who is very much in love with his wife. The role was brought to life by Paul Jameson. Paul gave a sincere performance and in so doing proved we should accept our loved ones without judgement.
Playing Lady Chilton was an actress of experience who allowed the dialogue to “do its job”. Pauline Nevell knows how to phrase a line, and in so doing brought truth and believability to the new Victorian liberated woman.
Mabel is the Chiltern’s daughter who eventually is engaged to Goring. There is no real depth to the character, which could be the attraction for Robert Goring. Jennifer Costello, as the uncomplicated Mabel Chiltern, conveyed her innocence and charm.
The dark angel descends on the party in the guise of Mrs. Cheveley. She is unconventional, self-opinionated and doesn’t care what people say about her. Clare Nash played the calculating, blackmailing villain with wit, and with that all-important soupcon of venom.
The Earl of Caversham is Viscount Goring’s father. He is from the old school of politics. a foil for the actor playing his son. This allowed plenty of movement for the actor to characterise the old public servant. This was “meat on the plate” for David Hodgkinson who amusingly blustered and huffed his way through his scenes.
Trapped by expectation, Robert Goring is the busiest character in the play having to display the Victorian dandy, the wit, the compassion and the seriousness of the man. Darran Nash, in his first leading role, accomplished it all. The Wilde’s style of dialogue, body language of Robert, was neatly displayed. The accurate timing of the lines essential for any Wilde play, was well observed
It easy to see why this play, after all this time, is so popular: As Jorge Luis Borges said in one of his essays, “the fundamental flavour of Wilde’s work is happiness
Posted by St Joseph's Players at 19:40 No comments:

Email ThisBlogThis!Share to TwitterShare to FacebookShare to Pinterest
The BATS review just received. (well done) xx
Review
An Ideal Husband
St. Joseph’s Players
Set in Grosvenor Square, London at the home of Sir Robert and Lady Chiltern, Oscar Wilde’s An Ideal Husband tells the story of corruption and blackmail amongst the upper classes.
As the curtain opened the set was greeted by applause from the audience. Well-built and very effective that set the scene perfectly.
As the Chilterns host a distinguished dinner party, an old school day enemy of Lady Chiltern, Mrs Cheveley, arrives with blackmail in mind. She has a secret about Sir Robert and threatens to tell the world, which would end his political standing and status unless he agrees to her demands of supporting a fraudulent scheme to build a canal in Argentina.
With twists and turns aplenty the plot unfolds and the right people get their comeuppance.
Pauline Nevell in the role of Lady Chiltern was outstanding. A graceful, confident performance throughout. Paul Jameson as Sir Robert commanded the stage with a believable interpretation that displayed the right amount of emotion as he tried to deal with his unbearable predicament.
Clare Nash was on top form as Mrs Cheveley, a polished, well studied interpretation that showed versatility. Darren Nash as Viscount Goring, ex-fiancé of Cheveley, brought a tongue in cheek comedic side to the role, whilst showing great stage presence who succeeded in turning the blackmail around once he had been double crossed.
David Hodgkinson as The Earl of Caversham K.G, and Jennifer Costello – Miss Mabel Chiltern, both gave credible performances that complimented the rest of the cast. Supporting roles made completed the cast of 14 who all worked well together to make this a successful production.
Director, Donna Wood has done a sterling job in bringing this piece to the stage. The costumes were perfect for the period as afore mentioned the set complimented the action.
Well done to all.
Graham Cohen.
Posted by St Joseph's Players at 19:24 No comments:

It was refreshing to have a different interpretation of this fairy tale pantomime. Commercial theatre conveys the story in a few scenes keeping the casting to the minimum, which is understandable. As writer of this piece, Doreen Johnson’s concept took the audience on a pleasingly different selection of locations. The principal characters were there, along with new ones, to tell Cinderella’s story of becoming a princess.

All this was set against colourful, well-lit scenery and cloths, complementing a delightful set of costumes. Hair, wigs and make-up gave the finishing touches to all the well-drawn characters.

The direction was as traditional as it could be; proving that if you stick to the pantomime format, you will capture your audience. Music is an equal player with this tradition and the song selection is very important. The band and song interpretation were well executed. Movement and choreography were slick and added to each of the scenes.

The ensemble was made up of villagers, dancers and juniors,  Pantomime Sunbeams”. They all enhanced Cinder’s journey to find her Price Charming. Similarly, other characters, the Queen (Vicky Dixon), Ella’s friend, Belinda (Hannah Parr), the fairy godmother’s little helpers, Eeny (Scarlett Moss-Turner), Meeny (Melissa Kendrick) Gazella (Paige Collier) and the very capable Kitti Dixon, as August, all helped to bring magic to Pantoland.

Comedy is such an important element. There are two comic duos, the Broker’s men Hook (Chris Lovelady) and Crook (Luke Ellam). They kept up a funny inept harassment of trying to get payment from Baron Notabean. Then there are the two grotesque stepsisters, Dolce and Gabbana. As in all double acts, one has to be the feed. Paul Jameson, as Dolce, set up all the business and fed the lines for the hilarious antics of Gabbana, played by Carl Hughes.

The 12 days of Christmas (the traditional subjects replaced with  pantomime words) was a highlight of their duo fun and games.

Baroness Notabean was given all the necessary cruel delivery by Donna Wood and trying to find a compromise for daughter Cinderella’s plight was the Baron, strongly characterised by Keith Hindley.

The ever faithful Buttons was too shy to disclose his feeling for Cinders but found a friend in Belinda. Cameron Lyth was suitably hopeful, but resigned to the friend only zone, when she realises she couldn’t compete with the prince.

Principal boys are rarely seen. It was a treat for both Prince Charming and Dandini to be played as originally portrayed. Zoe Unsworth gave a strong vocal interpretation as the friend of the prince. Clare Nash was every inch the charming prince. They were both convincing and carried their roles with gusto.

Looking after Cinderella was Primrose Goodbody her Fairy Godmother. Katherine Roberts gave enchantment to the fairy tale making sure Cinders got to the ball. The transformation scene achieved the right response from the audience.

In the title role, Karen Jones sang and acted her way into Prince Charming’s arms: the glass slipper was rightfully hers.

This was an evening of playful drama, music, dance, and fun, “Bibbidi-Bobbidi-Boo”.

Posted by St Joseph's Players at 22:14 No comments: